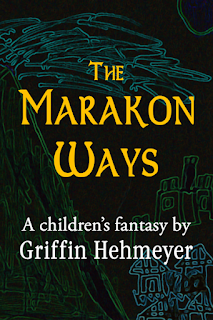 I am very proud of my 8 year old son, Griffin! Over the past seven months he wrote an 8 chapter, 60 page fantasy novel that tells a "clever and engrossing story." From the book's back cover:


Lily and Daniel don't realize, when they first see a wolf in the kangaroo pen at the zoo, that they are about to embark on an amazing adventure. But after the wolf disappears into thin air, the two children quickly discover that things in the real world don't always happen the way that grownups tell them they should. Lily and Daniel become trapped in a vortex that transports them to an unknown world called Wolf Land. There they learn that they must save a strange breed of wolf-people and an entire way of life from Arclos and his five evil sons using an ancient martial art called the Marakon Ways. Written by eight year old Griffin Hehmeyer and illustrated by his classmates, The Marakon Ways is an entertaining fantasy story that appeals directly to the child in all of us.

Each chapter is illustrated by Griffin's classmates, and the book begins with a beautiful map of Wolf Land. I'm extremely impressed with the quality of the narrative, and love watching children read it. The straightforward language is accessible to them, and the book's humor hits them just right. It is clear that a child knows how to speak directly to other children. Griffin shares the following about his experience writing:


"When I first started this book, I had a hard time thinking of ideas. As I got closer to the ending it was easier to think of what to say. I am going to write five more books in this series. I think that you should try to write a book too. It is lots of fun, whether it is a book of less than a page or a book that has more than a hundred pages. I hope that my book inspires you."

The book will be available via Amazon and Barnes and Noble in a few weeks, but you can get a copy now via Lulu. Be sure to share with your friends and write a review after reading it to help others know how awesome it is.

Other posts on The Marakon Ways:
The book is now available via Amazon.com and as an audiobook via Audible.com.]
Posted by Jaime Teevan at 8:49 AM