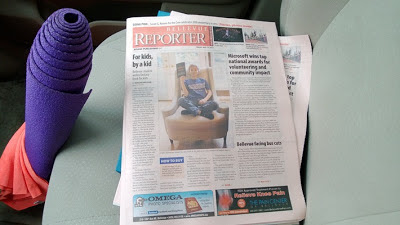 This is an update to my earlier posts about my eight year old son’s experience writing a 64-page fantasy novel titled The Marakon Ways. We self-published the book as an easy way to share it with friends and family. I guessed we might possibly sell up to 100 copies, but to all of our surprise we have already sold more than twice that! And the book only just became available via Amazon today.

The main reason for the book’s unexpected success is that Cory Doctorow posted a link to my blog post about Making the Marakon Ways on Boing Boing. I noticed something strange was happening when people started commenting on the post. Within hours friends I had not talked to for years were sending me congratulatory emails and people I had never met were excited to read the book. Shortly afterward, our local newspaper, The Bellevue Reporter, ran a front page article about it with a picture of Griffin.

The Marakon Ways was written by Griffin, but became a book thanks to the combined efforts of his teachers, classmates, and friends. The publicity lead to new offers of help, this time from complete strangers. For example, Ben Trafford, who sat on the EPUB committee for many years, offered to format the book as an ebook. Expect to be able to read The Marakon Ways on your Kindle shortly. Additionally John Hirst, the managing director at Create, contacted us about creating an audiobook. The offer seemed too good to be true, and I did everything I could to uncover it as the scam I was sure it was. But I failed to, so an audio version, read by a young British actor, will be available by the start of the school year (update: book now available). My husband and I joke that Griffin has no idea of all of the effort that so many people have put into his book. But I was touched to come to bed the other night and find a very sweet note from him thanking me for all I have done.

The publicity also means that we have sold enough books to cover the money we invested in publishing it, and we can start giving back. We do not earn very much per book, so the proceeds won’t be much, but they have been enough for me to order pens that say “The Marakon Ways” for each of Griffin’s classmates to thank them for illustrating the book. I now have a very special copy of the book with each child’s signature next to the picture they drew. We also threw the kids an ice cream party, which I am pretty sure they enjoyed more than the pens. Ninety percent of the remaining proceeds will go to The Little School, and the rest to Griffin.

I am also donating copies of the book to interested school and community libraries. Nancy Palmer, The Little School librarian, kindly sent out an announcement to Washington state school librarians, and we received a number of requests for the book that way, but I would like to open the offer up. If you know of a library within the US that would like a copy of The Marakon Ways, please ask the librarian to email their address and the name of the institution to press@teemeyer.com. It’s awesome to see the book inspire other children to write – and a few adults have told me it has inspired them, too.
Posted by Jaime Teevan at 2:53 PM