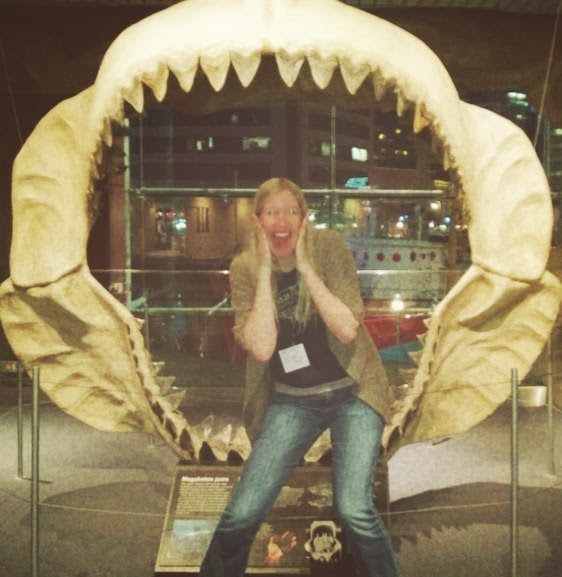 CSCW 2014 in Baltimore, MD was a lot of fun. There was so much good work presented that I often had a hard time choosing which sessions to attend. However, the common themes I paid attention to while there were:

Collaborative Search
A number of papers dealt with collaborative search and collaborative sensemaking. For example, Ryan Kelly and Stephen Payne presented a study of real-world use of collaborative search tools. They found that the most used features were for saving pages and viewing search history. People use this information to re-access previously found content and to bring content to collaborators attention.

Zhen Yue used hidden Markov models (HMMs) to build a picture of what is different between searching on your own versus with a collaborator, and found that the additional hidden states that emerged for collaborative search related to sensemaking. (Eugene Agichtein has a nice paper from SIGIR a few years ago looking at HMMs for search that's also worth a look.)

Niki Kittur found that other people's sensemaking efforts can be leveraged, with people who are provided with support for social sensemaking converging on a shared, high-quality vocabulary.  Of course, sometimes our collaborators can lead us astray, too. Ruogu Kang et al. found that bad information shared by a collaborator can interfere with sensemaking, even though it is viewed as helpful.

Merrie Morris, Shiri Azenkot and I presented some work on collaborative mobile search, which is a very common behavior. We observed that people stand differently when they search from their phone alone versus with another, and augment people's existing physical cues using phone orientation. A vertical phone means "I'm searching alone," while a horizontal phone signals collaboration to the device and those around you.

Several papers looked at social capital in relation to online question asking. Cliff presented a paper that looked at how people respond to social network requests. Unfortunately I walked in late, so I'll have to read the paper to get the details. Andre Forte looked at question asking among teens. In general, it seems that answering questions is a way to build social capital. For example, teens who are more web savvy are more likely to answer a question online.

Some of the research presented also touched on the difference between asking and searching. Anne Oeldorf-Hirsch shared work with Brent Hecht, Merrie Morris, Darren Gergle and me about how people choose to route their questions to search engines or social networks. She highlighted a U-shaped specificity curve, where very general, unformed needs or very specific needs are directed to search engines, and needs in-between are directed to friends. Andrea found that teens are more likely to ask questions than adults. I found her comment that kids don’t ask their social networks homework questions when talking about school interesting – since when you look at search engine logs it is clear that they run a million queries about homework. School-related behavior among teenagers may be a particularly interesting space to explore issues related to question routing.

Crowd Work
Finally, a number of papers at CSCW 2014 looked at on-demand workers, including those who use Mechanical Turk and on-demand mobile workers. A consistent picture arose from these studies.
Diving into the ethical aspect of crowd work, Walter Lasecki presented some work he did with Ece Kamar and me during his internship last summer. He found that about one third of workers are willing to do whatever you ask of them as long as you pay them, and one third of works will never do anything sketchy. However, there's a middle third that will alter their behavior contextually.

The transition between the virtual and real world came up in a number of crowd-based papers. For example, Rannie Teodoro et al. looked at workers who do physical tasks (e.g., via TaskRabbit or Gigwalk). There were also a handful of papers on organizing real-world events online. For example, one paper looked at the gap between online and offline participation in events, and another tried to help people create critical mass for their events using a system called Catalyst.

Due to a conflict, I missed Joy Kim's presentation on Ensemble, but look forward to reading the associated paper on my flight to WSDM 2014 this Sunday. Her work looks at how different people (e.g., leaders and the crowd) can play different roles in collaborative creation, and is very relevant to my recent research in selfsourcing.

Experimentation
In addition to seeing some great research at CSCW 2014, I also particularly enjoyed that the conference is willing to experiment on itself. This seems only appropriate for a conference on computer supported collaborative work. Just a few of the things I noticed being played with while there include:
CSCW is also thinking about playing with remote program committee meetings. While I tend to be against remote PC meetings, I would love to see what the CSCW community could do with them. Figuring out how to pull it off would unquestionably benefit research communities that already use remote meetings with relatively limited success.

The Baltimore waterfront was a beautiful place for a conference, and I recommend the Thames Street Oyster House and the National Aquarium.

For more news from CSCW 2014, see the Twitter stream from #CSCW2014. I direct the tweets I write (from @jteevan) at HCI-related conferences to @hci_f to avoid spamming uninterested followers. So if you follow me and would like to see these tweets in your feed, you should also follow @hci_f.
Posted by Jaime Teevan at 10:30 AM