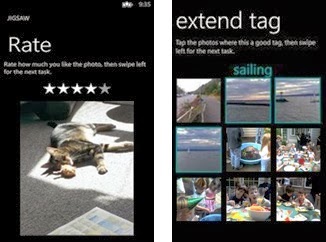 People have amassed large archives of digital photographs that have significant value to them but are difficult to use because they lack structure. For example, I have thousands of pictures of my four boys that I never get to enjoy because they sit in an unorganized mess of flat folders labeled with dates. To help people make better use of their photographs, Dan Liebling and I are developing a mobile selfsourcing application that supports the creation of a photobook from an unorganized set of photographs. I can’t wait to use it!

The application runs on Windows Phone and works with photo collections stored in the cloud. Users perform five types of microtasks in the following order:

Ignore: Photograph collections often contain a number of unimportant pictures, including pictures taken accidentally (e.g., of the inside of one’s pocket) or for administrative purposes (e.g., of a receipt). Users identify these unimportant photos to ignore by selecting their thumbnails from a set of temporally grouped pictures.

Rate: In addition to ignoring useless photos, it is important to identify particularly good ones. Users are asked to rate pictures that have not been ignored on a scale of one to five stars.

Tag: Users are also asked to tag photographs with associated names of people, places, and events. The app collects tags for the highest rated photographs, and applies these tags to other photos using Tag Extend.

Tag Extend: To extend a tag to additional photos, users are shown an existing tag and thumbnails that are similar to an already tagged photo. They are asked to select the photos to which the tag applies. Photos are ‘similar’ if they were taken close in time, or contain similar faces, locations, or image features.

Compare: Photos with the same tag may have the same rating, making it hard to identify the best photo with that tag. Users are thus asked to choose their favorite picture among two with similar ratings and tags.

These microtasks are used to generate a photobook from the user’s collection by selecting the best photos for each tag, sorting them by time, and using an online photobook creator to lay the pictures out in a book.