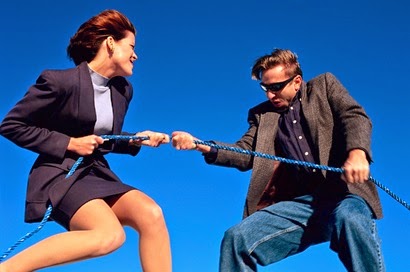 The research studies I posted last Friday about the role gender plays in the STEM workplace paint a consistent picture: women face significant discrimination. Women are paid (and hired, and tenured) less than men with the same qualifications, and these gender differences are particularly large for parents. While women are often encouraged to address the existing disparities by advocating for themselves (e.g., by being assertive, negotiating, or encouraging diversity), research shows this type of behavior typically incurs a further penalty.

Importantly, however, this does not just mean that MEN need to hire (and promote, and accept) more. Because the other consistent picture that arose from the studies I posted on Friday is that both men AND WOMEN discriminate against women. We all have deep seated biases that contribute to the problem.

Project Implicit at Harvard offers a number of online tests that allow individuals to explore their implicit biases, two of which focus on gender (gender and career and gender and science). When I took the tests, they showed that I am not immune to gendered interpretations:

This didn't surprise me, although I secretly hoped my results would come out otherwise. I think only my strong personal association as a female scientist enabled me overcome a strong internalized societal bias for the gender and science study:

Email ThisBlogThis!Share to TwitterShare to FacebookShare to Pinterest
Labels: Gender